(Available in R or Python.)

At the 2011 Joint Statistical Meetings, Nuo Xu of the University of Alabama at Birmingham presented a paper--coauthored with Xuan Huang also of UAB and Samuel Huang at the University of Cincinatti--in which a Universal Correlation Coefficient is defined and developed. For two discrete random variables `x` and `y`, this coefficient gives the degree of dependency, but not the form of dependency.

I've created an R library for calculating this coefficient. This coefficient is useful for programmatically determining, amongst several discrete random variables, which pairs have (potentially non-linear) relationships.

Huh? Coefficient of what?

Recall that the Pearson Correlation Coefficient `r` is a number between -1 and 1 that represents how close your data is to fitting on a line: In particular, if our variables are named `x` and `y`, then

where `E(x)` denotes the expected value of `x`.

So, how does it work?

Well, let's do this by way of example. First, go ahead and load the library (follow the installation instructions on the GitHub README to install the library).

Since this example will rely on randomly generated data, let's use the `set.seed()` function to set a particular seed for R's random number generator, and then pick 1000 randomly generated values uniformly selected between 0 and 1 for the variable `x`.

If we look at a scatterplot of `dat_xy`, we see a (contrived) non-linear relationship: 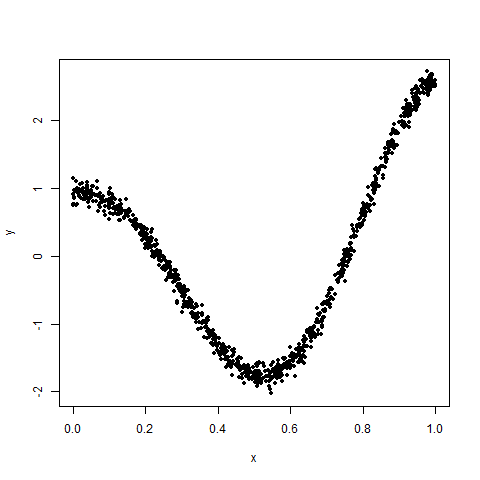 And, in fact, the Pearson correlation coefficient isn't helpful for this data, yielding a value of about `0.27`.

So, to get a coefficient that measures how close our data is to being on a curve (that may or may not be a line), we'll need to think a bit more generally. In particular, it will help us to move from specific `(x,y)` coordinates to ranks of `y` (in other words, the smallest `y` value has a rank of 1, the second lowest has a rank of 2, etc).

Why ranks? Well, go back to thinking about data that lies on a straight line with a positive slope. If we have `n` points in our scatterplot, then the `y` ranks--from left to right--are going to be `1,2,...,n`. In fact, this will be the case for data lying on any strictly increasing function of `x`. On the other hand, data lying on any strictly decreasing function of `x` will have the exact opposite rank set for `y`.

While this helps us sort out data that's close to being on curves that are functions of `x` and are either strictly increasing or strictly decreasing, we want to be even more general, so we instead look at absolute values of successive differences of ranks--ie the absolute value of the rank of the first `y` value minus the rank of the second `y` value, etc. For the case of strictly increasing or strictly decreasing data, all of these deltas are 1. And if our data looks like buckshot--ie no relationship whatsoever--then there will be a lot of variation in these deltas. This turns out to be our main insight and the motivation for the definition of the Universal Correlation Coefficient (which will be explicitly given below)

So, moving back to our data, our first transformation will be to sort it by `x` (in ascending order). There's a built-in function to do that, called `ucc.sort`.

And a quick look reveals that our data seems to be sorted by `x` (the function `head()` only reveals the first six rows of our data):

(Note that you can ignore the column of numbers before the `x` values; those are the row numbers of `dat_xy` before we sorted it.)

The `ucc` library also has a built-in function to determine the ranks of `y`, called `ucc.ranks`.

And the function for determining deltas--ie absolute values of successive ranks of `y` with respect to `x`--is `ucc.delta`. Note that this function returns a vector instead of a data frame.

And, in fact, here is a plot of the deltas of ranks of `dat_xy`: 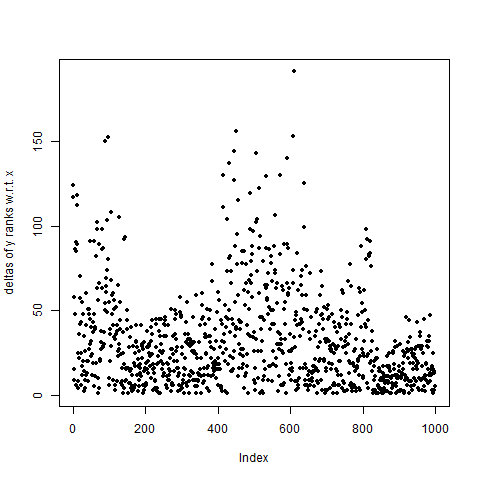 Now, this may initially look horrible: the deltas max out at over 150. However, these deltas are "squished" a lot farther down than if our data were random. In fact, let's go ahead and use a different random seed and generate another set of 1,000 random values.

Here's a scatterplot of `dat_random`: 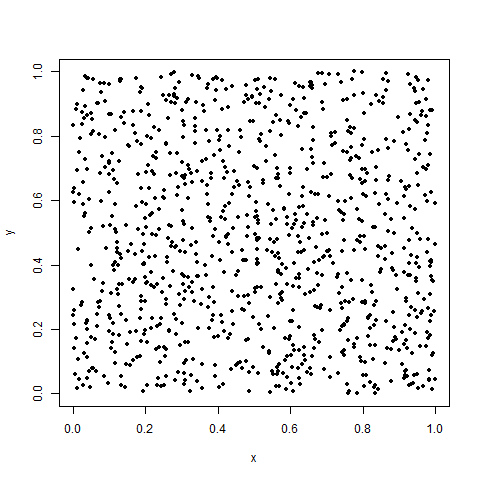 Yep. Buckshot. And here's a plot of the deltas of `y_random` with respect to `x`: 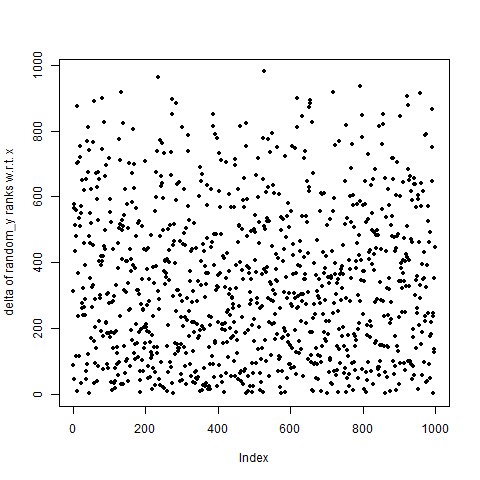 On the other hand, here's what the deltas look like for an exact fit: 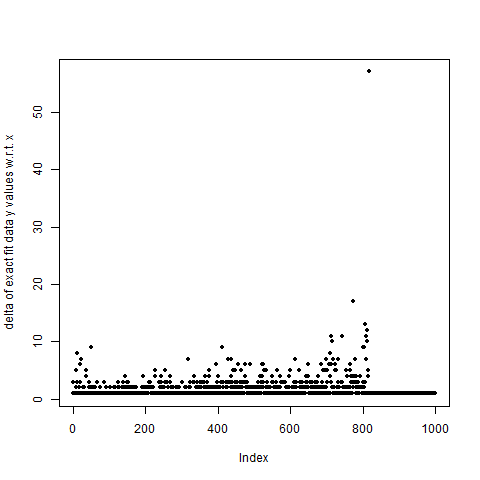 Definitely squished down a lot more!

All right, enough rambling, already. What exactly IS this Universal Correlation Coefficient?!

Now, imagine that the set of `y` ranks that we've found was randomly sampled out of all possible sets of `y` ranks for 1,000 different data points. For each possible set of ranks, we can compute the deltas and find the average of the deltas. So, the main question is how does `a` compare to `E(a)`, the expected value of delta averages across all sets of deltas?

Well, if we assume that these delta sets are independent and identically distributed, then it can be shown (using a bit of combinatorial finesse) that

So, with all of this out of the way, we define

Finally, we define the universal correlation coefficient to be the maximum of the two coefficients above: